“Evicted Redwood City tenants rally to stay in complex as calls grow for renter protections” announces the headline, with a photo of 14-year-old Gabriel Banuelos holding the eviction notice for the 18-unit apartment complex. 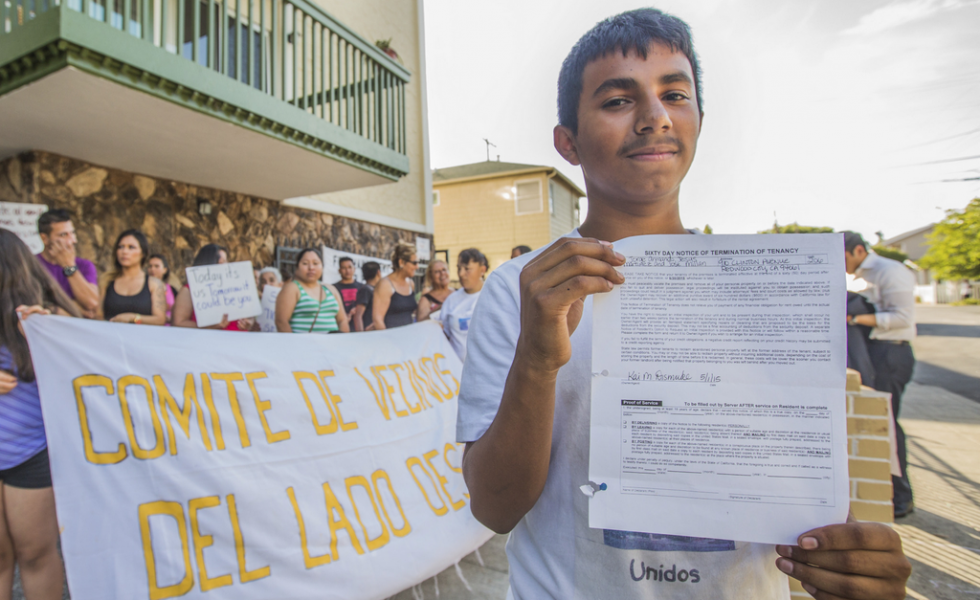 But why would this happen in “Deadwood” City (the long-standing local nickname for the moribund downtown area)? As findings from our Urban Displacement Project show, a variety of neighborhood conditions such as proximity to rail stations, historic older housing, new market-rate development, and rising housing prices can increase the risk of displacement.

Redwood City is still more affordable than many of the affluent Peninsula neighborhoods surrounding it. Consistent with its historic role as a home for low- and middle-income families, the community gained 724 new low-income households from 2000 to 2013 (an average of 42 households per census tract, compared to a region-wide increase of 59 households per tract). However, like the rest of the region, it is losing “naturally occurring” affordable housing – older housing that has filtered down from high-income households as its quality declines, and for which low-income residents pay less than 30% of their income in rent – and losing it more quickly than it can build new units.  From 2000 to 2013, the city lost 1,594 naturally affordable units, over half which were located near the Caltrans rail station, while building just 569 new market rate units.

And the crisis could get worse. Since 1980, the share of households burdened by housing costs (defined as households paying 35% or more of their income towards housing) has increased dramatically. Currently, almost half of low-income households in Redwood City live in neighborhoods at risk of or already experiencing displacement and gentrification pressures, many near downtown.

Is displacement inevitable for these households?  Not necessarily, but as our case study shows, the City is actively making choices that exacerbate the crisis. A Downtown Precise Plan envisions new market-rate development without offering protections for affordability, giving away density to developers without mandating inclusionary housing.  Along with tech businesses, new commercial space will host many service and retail businesses offering low-wage, dead-end jobs – yet the city lacks living wage or other asset building strategies to lift these workers into prosperity, or even just to help them live in town near work.

Redwood City can do better for its residents. It is fortunate to be part of San Mateo County’s 21 Elements, one of the region’s model collaborations.. This collaborative of planning department staff from the county’s 21 jurisdictions shares information and best practices related to the Housing Element, and nudges members like Redwood City towards providing and preserving more affordable housing. By working together on the region’s housing crisis, cities can coordinate policies and resources needed to provide more affordability. Such regional collaborations provide one path to reducing the inequality that divides our region. Redwood City can harness this resource to take the lead towards a more equitable future.

Does transit investment displace households and lead to more driving? Yes and no

View all posts by Karen Chapple →